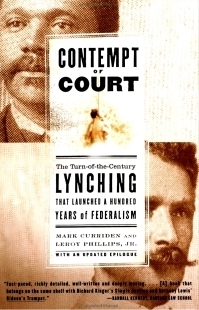 We had to read this book for our course of American constitutional law. It was one of the first books I have read in English. I have never found such a book, even in French! This book is very special, very interesting and very poignant. It is a true story which happened in the early 20th century in a southern United States still marked by racism. This is the story about a young woman raped, who assumes that the attacker is a black man. It is not anymore about finding the culprit but about pinning the blame at all costs on a black man. The story mingles political ambitions and the difficulties of the federal system of the United States at that time. The book explains perfectly how the ambitions of some can cause the death of another. Ed Johnson, a young black man, was arrested and immediately considered as the culprit. Despite evidences showing his innocence, judges did not believe him and he was soon considered as public enemy number one.

This book has really touched me because it shows the reality of the system in 1906, it shows that the fight of a few is never in vain. Rights, gender equality, freedom: these are fundamental principles of our society but they were born of hard struggle. The greatness of the United States appears in this book but its weaknesses are also outlined. Thanks to some men, thanks to the Supreme Court of the United States and, sadly, thanks to blatant injustices, the United States has been able to move towards to a better way of judging.

Une réflexion sur “CONTEMPT OF COURT : The Turn-of-the-Century lynching that launched a hundred years of federalism”